I was skeptical. I expected this new, serious, grown-up God of War to mistake misery for maturity—to think a Kratos that’s sullen instead of angry, that’s struggling to connect with his only living son rather than seeking vengeance for his dead family, would somehow make up for the adolescent angst that has defined all these games so far. I expected it to show one asshole’s journey into being a slightly different kind of asshole. There’s definitely a lot of that to this game—early on it seems like Kratos is worried that his son won’t grow up into a merciless, rage-filled genocide machine if he shows him even the slightest bit of tenderness—but it isn’t entirely a po-faced paean to surly dads and their sad mama’s boy sons. There’s at least a bit more soul here than the name on the box would ever lead you to believe. 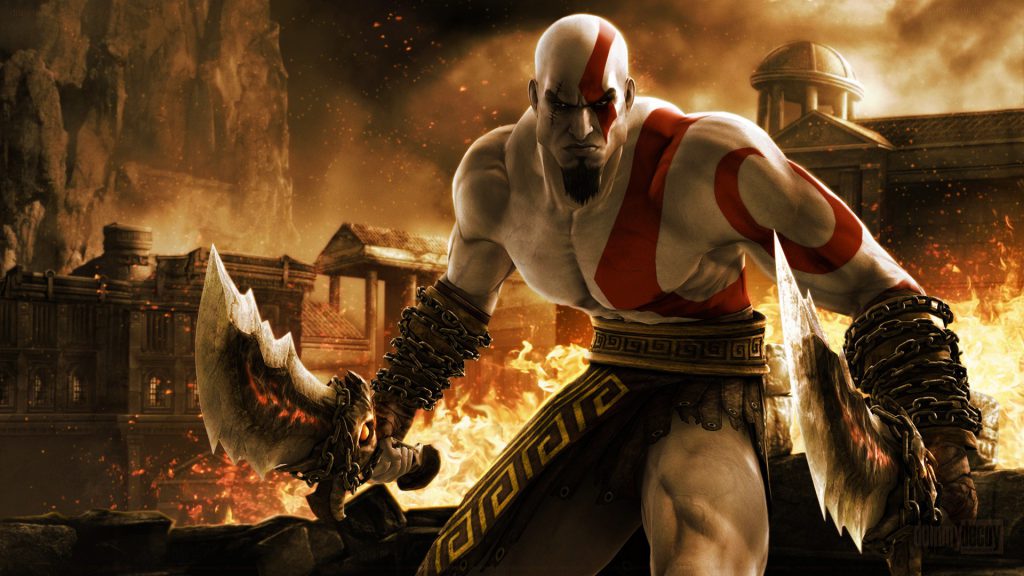 Here’s the gist: after slaughtering the entire Greek pantheon, Kratos beats it far north, settling in a cabin deep in Norse territory with his new wife. Eventually they’re joined by a son, Atreus; ashamed of his bloodthirsty past, Kratos decides to never let his son know about his life in Greece, or that he’s a god, and in effect turns into a stern, emotionless dad that feels like an absent father even when the whole family is literally living in a one-room shack. Eventually Kratos’s wife dies off-camera (seriously, never marry this man, all women of videogame antiquity), and he and the son he doesn’t really know have to take her ashes to the highest peak in videogameland, per her final request. Before they can leave Kratos has a major dust-up with a mysterious stranger who can’t feel any pain and is covered in rune tattoos, and who’s played by Jeremy Davies (of Lost and this ad) at his Jeremy Daviest. Who is this unknown assailant and what does he want? Could this be a harbinger of a whole new family of gods that Kratos will have to slay, one by one, but this time begrudgingly instead of lustily? Could it be anything else?

Kratos and Atreus’s journey to that mountain drives the plot, but it’s almost incidental to the game’s true narrative goal, which is tracking the ebbs and flows of their relationship. The mother is a McGuffin. As Kratos and Atreus battle their way through the nine realms, slicing through draugrs and dragons and dark elves, they start to forge the bonds that Kratos’s standoffishness had always prevented in the past. That relationship has its ups and downs—there’s one extended sequence where you’ll wish Kratos would forcefully teach Atreus some manners every time the boy opens his mouth—and it faces an uphill battle as impossible as Sisyphus’s in making us care about the massively unlikable Kratos we know from the older games in the series. The entire existence of Atreus is clearly calculated as a way to humanize this cartoon sociopath, and although it does work to an extent, it takes a very long time to reach that point.
It’s a believable relationship between an emotionally stunted dad and a timid, fearful son, even if it seems to condense a few years of personal development into the tight confines of a game. Although the broad arc might be rushed—Atreus’s burgeoning confidence turns into insolence and then into maturity in the span of one or two quests—the main story itself still feels bloated, with too many asides and detours along the way. It indulges in a very videogame way of stalling, with Kratos and Atreus on the cusp of reaching their goal only to find out they have to go to some other location first, with that repeated two or three times in a row at the end of the game. It feels like padding. Exploration is one of the things the game does exceptionally well, but it’s best when left as an option, as something you can pursue after finishing the story or when you don’t feel like heading off on the next main mission. God of War and the growth of its central relationship would be stronger if that story was a good bit shorter.