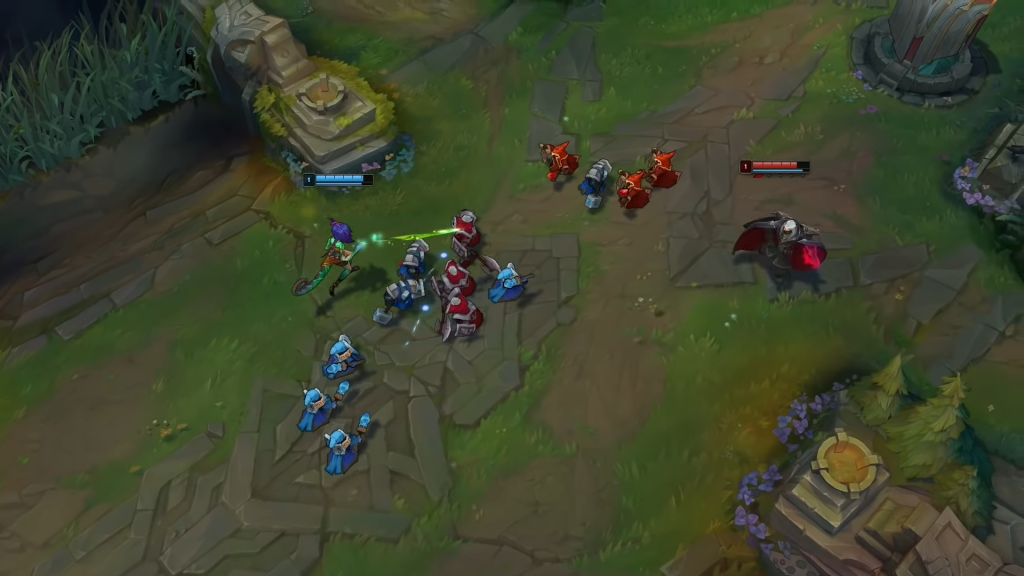 League of legends was created by the Riot Games in October 2009. It was designed as a MOBA game in which you play with a team occurred by real person. The main purpose of the game is to destroy enemy’s nexus (a power source in the team base) with your teammates but it is not that simple. First, you have to choose the right heroes to have a good team composition. It means that the heroes which chosen by you and your team mates should have related skills to each other. For example, if your all team choose the tank heroes, you cannot attack to your enemies and cannot destroy their nexus. As a result, your team will lose that match. Beneath choosing the right heroes, having a good timing in map quests is important.

Other details in the map are constructed in three main lanes, jungle, towers and two team bases. This structure is designed by Steve Feak who also designed the DOTA’s map. In the map, one player deploys in the top lane, the other one deploys in the mid lane, two of them get the bottom lane and the last one play in the jungle and tries to help his friends when they call for aid. Every lane has a main quest such as top lane player must dominate the enemy and destroy the tower in that line. The others generally try to gain gold and get the best items as much as possible. These items let you to become more powerful in attack and defense points according to type of your hero.  There are also some big monsters that give you advantages in the map if you kill them. For example, if you kill a Mountain Dragon, it gives you a %12 damage advantage on destroying the towers or if you kill Baron Nashor, your team and your minions (slots coming from the base and attacks the enemy towers) have more attack and defense points for 180 seconds.

Use your Mind and Skills!

League of Legends is not just a game. It is most likely a chess match. You have to have a strategy with your team because there are different tactics you have to follow with your team when you need to take an action. In the game, you have to figure up everything in details such as what you need to do while enemies attack, their positions, their sight, map quests, gaining gold, timing and team fights that suddenly begin… For instance, if the enemy team attacks you while you are trying to kill a dragon, what should you do? Should you quit the map quest and fight? Should you keep doing the quest? Or like a warrior, should you kill the dragon and fight with the enemy team at the same time? You should make this decision in less than 3 seconds. You had better keep these in mind if you are willing to win!

To play League of Legends, your computer’s system properties must be at least in the table below:

If your computer has these qualities, the next thing you have to do to have an account in Riot Games website. Secondly, you need the download the game client and set it up in your computer. You can download the game  from (https://na.leagueoflegends.com/en/ ) to your computer. After applying previous steps, the game begins with a training campaign which helps you to learn the main stuff, such as how to gain gold, how to use a hero’s skills, destroying the towers, and etc… After the training, a game starts against bots that controlled by AI. This very first match allows you to see and learn more details about the game and helps you acquire reflexes you need in the game with real players.

There are six main facts that you need to follow in order to be a champion in the game. These facts are being a team, timing, map quests, farming, sight and team fights.

Being a team means that you have to move like the parts of one body because each of the team member is important for your survival! You and your teammates move in a harmony with each other and warn their teammates against the dangers that are on the way!

You should have known and not forget defensing is important while attacking in the map. The first impacts that are being made your team and your enemy’s team are against to towers in lanes because, the towers must be destroyed if you are willing to reach enemy base. Teams are comprised by five players and map is big. Travelling around the map takes time because of the character’s movement speed. It takes almost 30 seconds to go bottom lane from the top lane without any skill or summoner spell such as teleportation. By considering these conditions, it is not easy to destroy these towers. Also, it is hard to destroy these towers by yourself. You should take action with your teammates with the purpose of destroying towers but there is something that you shouldn’t forget that their lanes become defenseless when they are there to help you. Timing comes to the board in that situation. You have to make a good calculation the time that takes to destroy the tower and turning back to your defense area.

Map quests can be divided as two section, as big ones and small ones. Big quests are needed to be done with your team because they take some time and source, such as killing the Baron Nashor (gives big amount of power and gold to each team members). Small quests are not required for the whole team, it’s up to the team members. These missions do not take much time and source. For instance, killing the monsters in the jungle or warding the map to see it more. The monsters in the jungle has low defense and health points and they give gold and power advantages to only one team member per killing. Warding the map can be done by the whole team members if they have wards in their item set. These wards generally placed in to bushes around the map because the heroes become unseen when they get inside them.

It has different meanings in this game. One of the meaning in the game is gaining gold by killing minions and monsters in the map. The more you farm, the better items you have in your item set. Killing enemy players also gains you plenty of golds.

You can’t see the whole area in the Summoner’s Rift (the map where the match play). Your team and the enemy team can use this disadvantage against each other but of course, there is a solution for the unseen area which is warding the dark zones in the map. Wards work like candles in the map. They are placed in to the areas where enemies could use to trap you or the purpose of hiding. Generally, the support players undertake this quests. They are travelling around the map and setting wards as much as possible but this becomes possible only if their team members create safe areas to them to set wards. This process has to be repeated because wards have time limits. They also can be destroyed by the enemy team players by using oracle lens or pink ward. These items have to be used to see wards because they become invisible after being set.

Riot games turned the League of Legends an e-sport event. It has been get across a big amount of interest by the gamers. Players founded teams, created national leagues in South Korea and North America. Moreover, there is even a world cup event. This event has been done every year since 2011. Every country sends their best team to these world cup and it becomes popular around the players as football tournaments. These tournaments’ final games are playing in an arena. The computers that players would use are placed in the middle of the arena and there are so many screens that show the gamer of the audition came to watch. Two anchors tell the match to crowd and there is even a fascinating cup ceremony in the end of the day!

Team up with your friends, train as much as you can do, never give up to learning new stuff about the game may be one day you will play in these finals! May be you will be the champion!