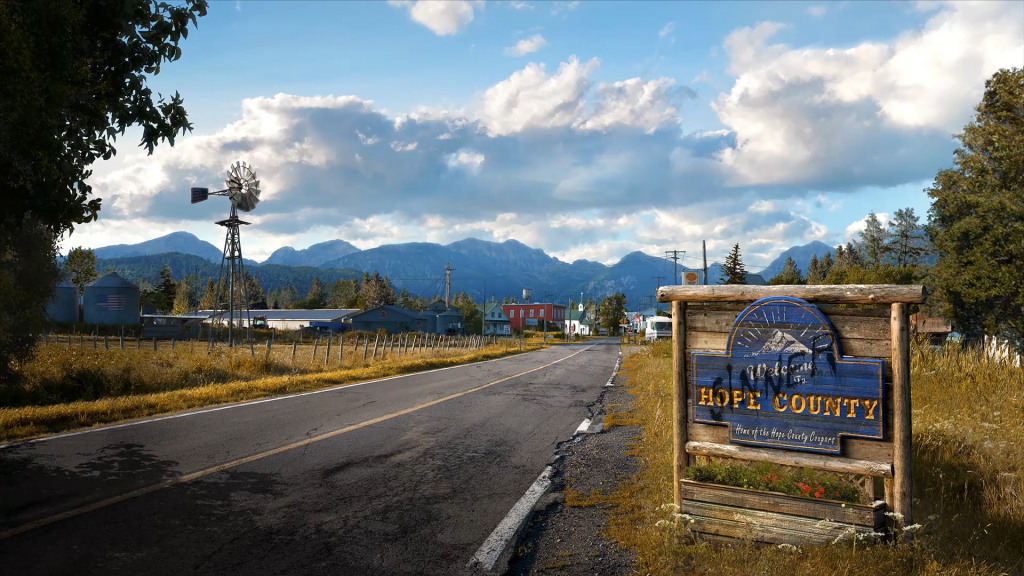 Far Cry, which first met with the players in 2004 and continued on its way as one of the oldest series of the game world, was in Crytek’s hands first. Making a great popularity in a very short time with the graphics and game play presented, the production changed hands in 2005 and switched to Ubisoft. In 2008, the series was presented as Far Cry 2; it was served to the open world with Dunia Engine. Of course, Dunia Engine is also a modified version of CryEngine.

After the release of Far Cry 2, there was no new game. In 2012, he reappeared with Far Cry 3 and began to take on the basis of a story in which there were crazy villains and who fought against people who set up a dictatorship. This theme, which got positive reactions from the players, was also processed in the following games and when we came to 2018, he invited us to the United States with Far Cry 5, a new Far Cry.

Far Cry 5 in modern times invites us to the state of Montana in the United States. In the fictional Hope County, we are sent to arrest the cult leader Joseph Seed, calling himself “the Father”. Since I don’t want to give the spoiler, I will try to give little information about our character and story. However, the subject of the game is based on annihilating the crazy villain as in the previous Far Cry. Now I would like to talk about Eden’s Gate, which was founded by Joseph Seed. Eden’s Gate sect, which has a structure similar to the congregations we have seen all over the world, believes that the end of the world has come and promises its paradise to its members.

‘’THE PARADISE IS NOT REAL’’

After a brief brainwashing, these sects, which literally enslave their members, turn Hope County into a sect base and tell everyone who lives in the area with us, or you are dead. This sect, which has committed many different crimes such as kidnapping, murder, possession of weapons, imposes some people’s lives on the region, a group of people trying to rebel against the sect. But the power of the cult is so great that all rebellions are suppressed.

We are resisting this uprising or resistance as the game tells us, it is somehow a hope for people and we are going through a great armed resistance with the opponents of the cult to bring down Joseph Seed. The game is co-op logic so that our own character does not have a specific story. You are already creating your own character when you start the game. The other characters in the game are constantly calling you Officer; you will understand why when you start the game.

Let’s talk about our main enemy, Joseph Seed. Joseph Seed, who considers himself a kind of prophet, is one of the best quality bad guys who have been seen in the series after Vaas. Seed, showing his psychopath in a very nice way both in his speech style and in his behavior, is one of the characters you will always want to meet. The other characters, who are also the brothers of our main character, have been designed successfully, although not as much as Joseph. Each of them successfully introduces you to the character structure of the game. On the other hand, we can say that the same attention was given to our friends in the game. All the characters we encounter in the story manage to make a difference with their originality and different personalities. Throughout the game you will not encounter anyone who comes across and grins with characteristic features. I can say that Ubisoft has done a great job.

‘’FIGHT AGAINST A FAKE PROPHET!’’

Let’s come to the game’s game play. First of all, there are not too many surprises for players who have played previous versions of Far Cry. The game’s sense of conflict is almost identical to previous Far Cry games. Far Cry has already been a beloved one for many years with basic game play features. Whether the game’s weapons are firing effects, the way they grab the gun when they run, they’ve all been successful.

On the other hand, there are minor changes in the way we play the game. As you know, the previous Far Cry and other Ubisoft games to go up the hill climb the radio tower and open the region to open situations such as Far Cry 5 has been removed. There is also a small surprise in a dialogue about this. Instead, the game continually gives you little side quests and wants you to continue the story of the game. Again, like the previous games, we are able to attack the regions of the tariqas and capture the region. After each region we have seized, new missions await us. The structure of the side missions in the game is designed quite successfully, each supported by small stories; the post-mission awards are also successful. After almost every new task, I can say that it is possible to encounter a new weapon or a new vehicle.

Speaking of regions, I would like to talk briefly about the world of the game. First of all, we encounter a very different region than the previous games. A part of the state of Montana, famous for its nature, is presented to us. The town theme, which we see visually in Hollywood films, is the main theme of Far Cry 5. The details in small towns, such as bars and gun shops, look pretty nice. Especially in the evening, these small towns, illuminated by neon lights, succeed in loving themselves as we love the small towns of GTA: San Andreas.

The other regions are usually large meadows, forests and fields. However, as I mentioned before, it is very pleasant to walk around freely in these regions that we see frequently in movies. Let’s not forget to mention that the game rewards your discoveries. While today’s games try to intensify the sense of discovery, Far Cry 5 has successfully set this balance. For example, after a discovery, you can buy a brand new vehicle to satisfy the player. The customization part of the game is made without exaggeration. There are 2-3 different parts you can put on your weapons, and you can also change the coating of the weapon. You can also customize your character with different outfits, all of which you can make from the shops in the game. To do that, you need the money you earn in the game, and of course you win with the help of side and main tasks.

The story of the game is immense. The reason for this is that when you go to point A and trigger the main task, in Far Cry 5 this is different in some tasks. As you progress to the main task point that the game tells you, when you are on the way, you can get something on your way and say, “What’s going on?”  And the main task might begin suddenly. The main tasks that require different mechanics in the game, both voiceover and structurally, saves the player from monotony. Far Cry 5 manages to pass the class.

Character details, coatings offer the same quality to the player. But unfortunately I can’t say the same for animations. Although face animations are successful in the dialogues in the main story, we may face an Andromeda crisis again in the side missions. I don’t exaggerate if I say the characters in the side quests are just like robots moving their lips. But on the other hand, I can say that the game is pleasing to the eye. In addition, the optimization of Far Cry 5 is very, very successful.

Long story short Far Cry 5 is the perfect game to meet the need for the open world FPS game that has been felt in recent years. Although there are minor flaws, the game manages to offer you the promises. The map was a little bit small, and it was almost perfect if there were no problems with the animations. Consequently, it is a game that players would love to spend hours in it.